A huge success and a small defeat

After the assembly in Bonn, first evaluations of the working groups and a little time to breathe, we would like to address all those who have participated in the action and preparation, whether on the tracks, in the camp, in the finger structures, the EG local groups, working groups or elsewhere. Only through our joint efforts were we able to make this big, very successful action possible! We would like to share some impressions and thoughts with you here.

With a total of more than 5,000 participants, it was the biggest Ende Gelände action ever. 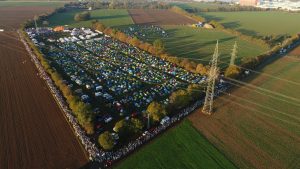 The outrage caused by the eviction of the Hambacher Forest (Hambi), the police violence and the absolutely disproportionate reactions of the state government favoured an enormous dynamic and broadening of the movement this year. This was also noticeable in our mobilization – nationwide and internationally. New Ende Gelände local groups were founded, already existing were getting a lot of new members. In the local groups, local mobilization work was carried out tirelessly and hundreds of thousands of flyers, stickers and posters were distributed. Last but not least, the continuous international work of our alliance and the special train have contributed to the fact that considerably more activists have put on their white suits than at the previous action for the World Climate Conference in 2017.

However, we must recognise that the diversity of our structures is still capable of development. Many of our activists are white, young and come from more academic backgrounds. But we want to be an open, safe and accessible place for all people. So we should also think about how we can make it easier for activists over 40, activists of colour and workers to join us. Many of our activists have little action experience.
We mobilize little successfully in other spectra of the radical left (e.g. anti-fascist, anti-rascist or „right to city“ groups). Exceptions confirm the rule here, of course.

We have achieved the largest and longest rail blockade in the Rhenish brown coal mining area. 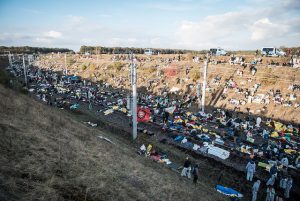 About 2,500 people were at the peak on the tracks. We reached our goal of a 1.5-day action including overnight stay. This is a great success, which was made possible by several hundred people in the support structures and in the reproduction work of the camp. However, the fact that almost 2,000 people landed in police cauldrons, many of whom had very frustrating experiences, clouds this success. Many of those who were on the blockade had very empowering experiences, which we wanted to make possible for everyone else. The entire action was only successful because there were so many of us – each one in the action sent a powerful signal.

Our action was massively fought by the state authorities.

The denial of a camp near the coal infrastructure, the delaying tactics of the assembly authorities in the run-up, the evacuation of the Hambi-Camp extension, the reception kettle for the special train lasting several hours, the use of several water cannons, clearance tanks, etc. All this shows that the repression authorities wanted to make the action as difficult as possible for us by a hard attrition tactic. But it also shows that they take us seriously as opponents – and that’s good!

After the eviction of the Hambi camp and the move to Stepprath many of the participants were on the edge of their capacity. Sitting on a camp, 15 kilometres away from potential action targets and knowing 1,000 activists inside a kettle at the station felt overwhelming and oppressive to many of us on the day before the action. So the repression against us was not without effect. 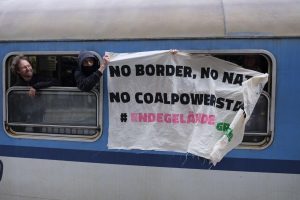 But due to all the people who had already done so much work in the days and months before the action and due to all those who spontaneously got involved, we were still able to act and react to the much more difficult situation. We were speechless by the resistance of those who were detained by the police at the station for 10 hours, then arrived in a dark and rainy camp and still knew: tomorrow morning we’re going into action. Apparently driven into a corner by the repressive authorities, we developed forces together that we would not have thought possible.

The recipe for success for this action: flexibility, determination and a not-so-small portion of luck.

The repression forced us to redesign several plans in a very short time. Some people, for example, had to change their sleeping place during the night. This flexibility was a great challenge for everyone, but it was absolutely necessary for us to remain able to act. It led to confusion and displeasure in the action plena because very little information could be passed on. We would have liked that to have been different. But we had the confidence in all of us and the imagination that even a 10 kilometre long footpath is a sporting challenge, but not an impossibility.

In front of the suburban train and the motorway, with water cannons behing ans in front of us and hardly any manoeuvring space in any direction, stopping tug in the nerves. Our means of communication reached their limits in the face of the huge mass of people – but we learned from this experience too. 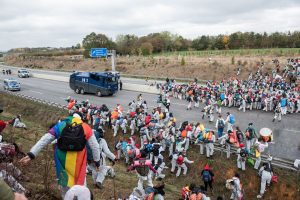 All the more impressive was the determination of all activists. It goes without saying that we overcame fences, avoided water cannons and policemen and were not distracted by riding squadrons. The low threshold of this action can be argued about, in the previous feedbacks this has surprisingly found little mention. Another finger almost made it into the Inden open-cast mine and employed many police forces, which helped the others a lot to reach their goal. In spite of the previous strains, everyone was determined to paralyze the coal infrastructure.

Many who did not make it to the railways felt left behind by the action structures.

Previous evaluations have already made it clear that in the developing kettle in front of the motorway, activists felt alone in a wide field and without the necessary information. When it comes to communication, we have a few things to work through in order to reach our goal with less chaos and even more people at the next action. For those who couldn’t get on the track, the camp lacked information on how they could continue to support the existing blockade. Nevertheless, groups left during the night with additional food and blankets. We are learning from all these experiences and will do even better next time.

The action was effective, not just symbolic.

Arriving on the tracks, it was unclear to some whether this was the right place to block. Many activists asked themselves when the power plants would finally be shut down if we stopped the coal supply. The question of the balance between symbolic and material blockade has to be asked again and again. Under the given circumstances, a rail blockade as long as possible seemed to us to be the best mixture of effectiveness, symbolic strength and, last but not least, feasibility. 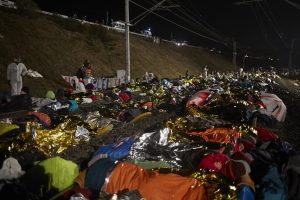 The action only resulted in a 10% throttling of the power plant. Nevertheless, the action was not “only symbolic”, but effective in several respects. From our point of view, the effectiveness is not first shown in the material, but in the political effect. Strong symbols are effective when they convey our demands: Get out of the coal immediately! The media showed fantastic pictures of thousands of determined people on the long footpath, on the motorway, at the edge of the opencast mine or at night on the tracks, in floodlights under golden rescue blankets. Our message arrived, a lot of sympathy was on our side. In addition, no coal from the Hambach open-cast mine could be delivered to the power plants for more than 30 hours. Our opponent was prepared for this blockade and took countermeasures in good time. But it still hurts him, because he notices that we are becoming more and more determined.

We measure our joint success not only by the impact in the media or the consequences for RWE. It was the first mass action of civil disobedience in which an unbelievably huge number of people gathered experience that will hopefully shape them for a long time to come. All our local Ende Gelände and climate groups are strengthened by the many activists who want to organize themselves permanently after the empowering experiences of the mass action. Thousands of people have taken part in action trainings and last but not least, together we have ensured that civil disobedience remains socially legitimate and acceptable – just as it was during the eviction of the Hambi.

We say what we do and we do what we say.

We have announced in advance that we will stay overnight. We decided months ago internally to stay 1.5 days and not to start a second wave. We kept to this during the action. This is the reliability that distinguishes us as an alliance and gives many activists*the necessary security. At the same time, other activists would have liked to block the tracks even longer. Some people who didn’t make it onto the tracks on Saturday would have liked to leave at night or the next morning together with many others. Some groups organized and managed this themselves.
The action structures cannot always cover all needs, so there is a need for space and opportunities for initiatives and self-organisation. Is there a contradiction between this and our attempt to offer new activists a lot of structure and information to join Ende Gelände? Or is it possible to reconcile both?

As Ende Gelände aliance, we place very high demands on ourselves to do justice to everyone and to work on ourselves after problematic situations. And there are high expectations of the alliance. But as we have now noticed, our capacities sometimes reach their limits at the moment when high pressure of repression encounters an ever-increasing movement.

We don’t want to fall into the trap of blind growth, “getting bigger and bigger”. We will learn as Ende Gelände and continue to create responsible, very reliable structures for many new activists. At the same time we have to leave room so that we are all aware: we do not “consume” action, but we are together the action, with our liveliness and determination. We must allow “the small failure” to happen and make it transparent to all those involved.

This is the only way we can work out solutions together and flexibly – and know how great the resistance is that is demanded of us. We see great potential in this. Because we have shown that we can create something wonderful out of impossible situations, and we have no doubt about that for the future!

We are therefore looking forward to all those who will start the new year with Ende Gelände at the EG plenum in February, who will join the many local groups and hopefully strengthen the working groups.

We are unstoppable – another world is possible! 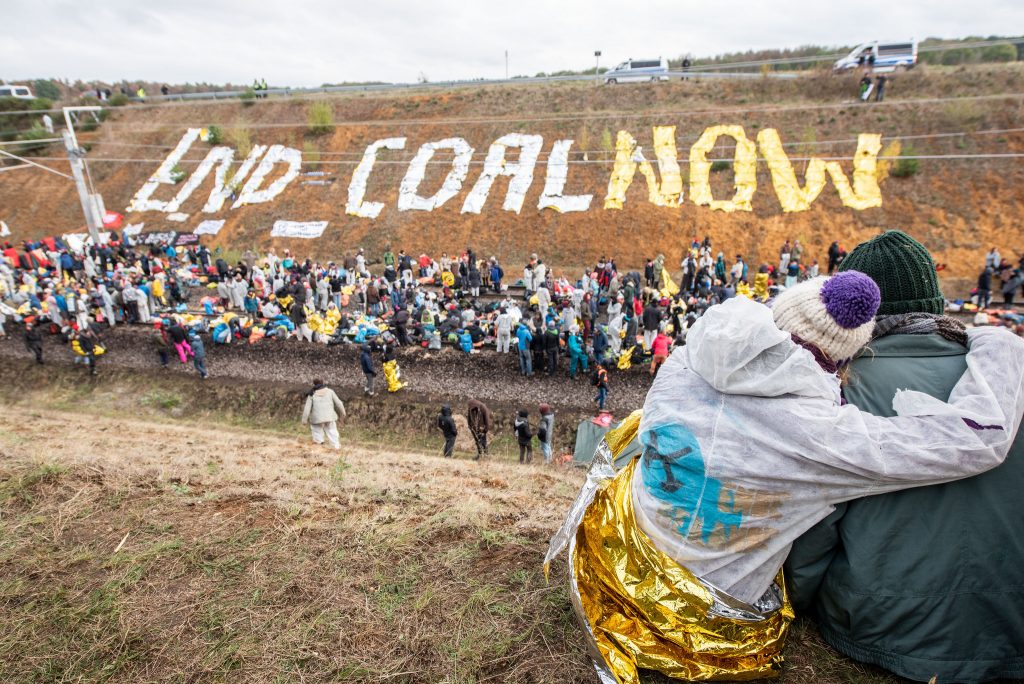