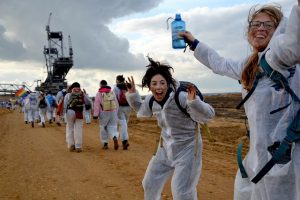 Conclusion of repression regarding Ende Gelände 2015: None of the activists of Ende Gelaende 2015 have been found guilty by the court!

The repressive agencies are almost done with their investigation and prosecution of the 2015 Ende Gelaende action. We, the Antirepression group in the Rhineland area (AntiRRR), took this as a reason to compile a short summary of all criminal courtcases that took place. We do this in order to make the movement more aware of the repression that can ensue after an action, so that future actions can be mapped out with this knowledge in mind. The numbers all refer to people affected by the aftermath of the different actions around Ende Gelaende 2015 that we had knowledge of.

Connected to Ende Gelaende 2015, there were two main accusations activists had to face: trespassing (German: Hausfriedensbruch, because they allegedly entered the company’s premises) and rioting (German: Landfriedensbruch, as a result of confrontations with the police, e.g. when people were flowing or pushing through police lines).

Sixteen activists received penalty orders for rioting, and all of them filed an objection. Six of them were discontinued on condition of the accused paying a few hundred euros to a non-profit organisation. One trial went on for two days and then ended in a verdict of not guilty. Five more were discontinued without orders. Four courtcases are still underway, either because the court hasn’t set a date for trial yet, or because it decided to postpone the court date again and again.

Police was only able to identify part of the people they encountered in the mine. Those who could be identified were then under investigation for trespassing. Since trespassing is a crime that can only be prosecuted if the legal body whose premises the trepassing took place on demands the authorities to continue prosecution, RWE had a choice: only those who did not sign a declaration to cease and desist (see below), agreeing to in the future refrain from disrupting RWE’s operations, would be put on trial. This resulted in about 85 penalty orders that were sent out over the course of 2016 and 2017. We can’t give you exact numbers since there are so many cases and communication wasn’t always clear.

Objections were filed in about 65 of those cases. This goes to show just how much our movement is willing to fight the courts. We know of 13 penalty orders that came into force, either because no objection was filed or because the objection was withdrawn once a date for trial was set. People affected by final penalty orders were thereby legally convicted and had to pay fines, some of them supported by Rote Hilfe (Red Help) or our solidarity fund. In five cases, the accused at some point decided to sign RWE’s declaration to cease and desist, resulting in the company’s withdrawal of the prosecution and a discontinuation of the trials. Three other cases with very particular circumstances ended in a discontinuation/nolle prosequi without orders.

After the objections were filed, the local courts offered (almost?) all of the defendants a deal: they would discontinue the charges, but only if the defendants would pay the same amount of money they would have had to pay had the penalty order become final. At least eight people took this deal, some managed to negotiate a smaller amount (half the money claimed originally), and many took our suggestion and rejected the deal. In some other cases we don’t know what the defendants decided to do, because they did not keep us posted.

From October 2016 onwards, we suddenly had to deal with numerous court dates. Most of them were very short-notice (within the next two or three weeks of notification), almost all of them were postponed, often because the lawyers supporting us couldn’t make time so quickly. A verdict was found in none of these cases. Four people defending themselves in front of the court in Erkelenz were the first to be found ”not guilty” in May 2017. A witness from RWE had stated that the company’s premises were not entirely enclosed (with something like a fence), hence the accusation of trespassing could not be held up as easily. This verdict of not guilty was used as an example by the court in Grevenbroich when they decided upon three more cases in June 2017. This makes a total of seven verdicts of not guilty so far. State prosecution lodged an appeal for the facts of the case to be revisited, as they seemed to be trying to find another way of finding the defendants guilty. All other cases rested until in December 2017 the state prosecution realised that the defendants actions cannot be seen as trespassing. Legally, entering premises like an open cast mine if they are not completely enclosed is not trespassing!

Thereupon state prosecution began repealing the requests to file penalty orders in the cases that were still ongoing, thereby destroying the fundamental base they had to prosecute in the first place. We were informed about these developments by some defendants in whose cases the repeal had been finished succesfully, other defendants filed for the requests to be retracted themselves. This results in these courtcases not only being null and void, but also the state having to pay for all lawyers involved. We expect the same to happen for all remaining (roundabout) thirty cases of trespassing from Ende Gelaende 2015 that are still being prosecuted.

Charges were also brought against three people who allegedly were part of an Ende Gelaende 2015 action in which they abseiled from a highway bridge, thereby enabling others to cross that very highway. The case is still ongoing and will most likely take quite some time. The state prosecution has changed the charge several times, from attempted dangerous interference with road traffic, to coercion, to attempted coercion. The court spent 2016 and 2017 argueing whether or not the defendants could be represented by lay people as their defence counsel. To this date, we do not know when the next court date at the court in Erkelenz will be.

Declarations to cease and desist

The criminal charges did not challenge us as much as finding a way to deal with RWE’s declarations to cease and desist (DCDs) did: all people who could be identified and who RWE then had knowledge of were supposed to sign to ask a document asking them to in the future refrain from ever again entering RWE’s premises or disrupting their business in any other way. Not complying with these orders, basically a contract validated by people’s signatures, would result in very costly penalty fines. Unfortunately, opposing claims to cease and desist at court will also result in high legal expenses.

We know of at least 130 people who received a declaration to cease and desist, at least 43 of them signed them, 10 decided to alter the document individually (e.g. agreeing that they would refrain from entering the coal mine Garzweiler, instead of all of RWE’s mines as they claimed), and at least 12 people definitely did not sign them. We have no information about what the remaining ca. 65 people decided to do. In 2017, RWE opened a civil lawsuit against six people who did not sign the DCD or signed an altered version. Five of them then signed the document. The sixth person is most likely going to go through with the lawsuit with support of the campaign ”Untenlassen”/”Leave it in the ground”. If RWE wants to file more civil lawsuits against activists who were part of Ende Gelaende 2015, they have to do it until the end of 2018.

Until now, none of the activists of Ende Gelaende 2015 have been found guilty by the court, and that is with almost all lawsuits being finished. It has become clear that fighting back and showing endurance can be very beneficial, since the outcome was definitely in favour of people who did not accept a penalty order or take the deals they were offered for their case to be dicontinued.

The costs we know of amount to about 14.000 €, covered by the defendants themselves, the Rote Hilfe (Red Help) and the climate movement’s own antirepression structures. If people applied for it, Rote Hilfe covered 50% of their legal costs, which they did in any of the Ende Gelaende 2015 activists applying who we know of. Many defendants could (and also wanted to) pay part of their legal costs themselves.
Supporting Ende Gelaende 2015 activists, the antirepression structures of the climate movement paid 3000€ in total, e.g. paying lawyers, court costs, fines, orders of discontinued cases where money had to be paid to non-profit organisations, and also travelling costs. The costs of the declarations to cease and desist are mostly covered by the ”Untenlassen” (”Leave the coal in the ground instead of undermining our protest) campaign.

In the legal follow-up of this action, we learned a lot as a movement. With the help of AntiRRR, people affected by lawsuits etc. were able to get a better understanding of their own cases, built networks with other defendants and worked on their own ideas on what their defence could look like. Thus, many trials were also used as a platform to discuss the defendant’s political motivation, which the local press picked up. The defendants were also supported by many other people who showed their solidarity throughout their trials.

On that note, we are very much looking forward to future actions, and to continuing to work towards not a single person being left alone with any repression they might be facing.