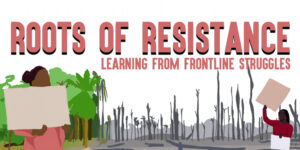 For over 500 years, BIPoC have been fighting against (neo)colonialism, racism, and against the exploitation as well as destruction of their territories and livelihoods. In spite of historical oppression and present harassment of militarized states and paramilitary groups, BIPoC communities are still standing and decisively resisting destructive neocolonial extractivism. Those are the same people at the frontline fighting the fossil fuel/fracking projects that the German government and European Union insist to support, through major investments on LNG imports and other fossil gas-related infrastructures that deepen colonial and racist structures.

The white-dominated German/European climate justice movement has then much to learn from such struggles, if willing to listen. A Eurocentric perspective on climate justice is still prevalent in the movement, which goes along with the reproduction of racism in its structures. To stop reproducing such power dynamics and to take the steps towards a fully decolonial and antiracist climate justice movement, there is the need to create spaces to actively listen to the voices and the perspectives of those historically persecuted, learn from them and mirror their views.

This series of (online) events is Ende Gelände’s attempt to live up to that challenge. By learning from the knowledge and experience of BIPoC in frontline struggles and, more generally, from different perspectives on (climate) justice (e.g. critique of problematic (hegemonic) approaches in climate modelling), we want to shed a light on the interconnectedness of neocolonialism, violence, exploitation, extractivism, the fossil fuel industry and the climate crisis.

Information about past events

There are recordings of some events, these are linked in the event information.

In the event, Peter will contextualise the concept of ecocide and explain why the Ecocide Act is a powerful tool in the fight against colonial continuities and environmental destruction and thus a solution approach to address the climate crisis. He will also critically question the notion of climate justice and what it has to do with white appropriation of the movement.

Peter was born in Nigeria and has lived in Germany for over 30 years. He is a long-time Shell critic, human rights activist and environmental activist. As a freelance journalist, educational consultant and event manager, he deals with colonial continuities and the repatriation of colonial looted art, among other things. He is also a co-founder and current spokesperson for the Ecocide Law Alliance. Peter has been fighting against extractivism and colonial continuities for many years.  With the Ecocide Law Alliance, he fights for ecocide to be recognised as a crime under international law and for environmental flight to be recognised as grounds for asylum.

3rd of Mai 2022: Lithium and Copper predatory mining -
The Neocolonial Facet of Green Capitalism and the Resistance Struggles in Chile

In this event, Andrea Vasquez reports on the devastating social and ecological consequences of lithium mining in the city of Calama and on the feminist indigenous resistance against it. Andrea Vasquez is a sociologist and environmental activist. She is a spokesperson for the organisation “Coordinadora por la defensa del rio Loa y la Madre Tierra” in the city of Calama, Chile, the centre of copper mining. The organisation was founded in 2012. Most of the members are (indigenous) women. They denounce the impact of the “megamineria” (a.k.a. megamine) on the environment, quality of life and health that comes with living in an area heavily affected by mining, and fight for social and environmental justice.

24th of May 2022: The Permian Climate Bomb is coming to Europe

The “Permian Climate Bomb” is a communication campaign that tracks the oil and gas development in the Permian Basin in the US, its impacts and possible future scenarios. The speakers will discuss the contribution of the Permian boom to climate breakdown, the impacts of fracking on communities and public health, and the link between fossil gas extraction, LNG (liquefied-natural-gas) and export-markets like Europe and Germany. Covering an area that goes from West Texas to the Gulf Coast, the Permian speakers will explain how extraction of fossil fuels and associated infrastructure, such as pipelines, petrochemical industries and LNG export terminals, is reinforcing systemic environmental injustices as racism and internal colonialism.

31st of May: Climate modelling and degrowth

with Kai Kuhnhenn and Luisa Cordroch

Most approaches in mainstream climate-related energy modelling focus on techno-fixes, thereby shaping the neocolonial discourse on the solutions to the climate crisis. They clash with the idea of a “just transition” and represent an often overlooked obstacle to real system change. This capitalistic, patriarchal and white-supremacist way of thinking heavily impacts energy modelling (e.g. integrated assessment models and Germany-specific energy scenarios), which in turn highly influences what the general public perceives as “politically feasible” and, more broadly, the current narrative on the mitigation approaches to the climate crisis.

With our speakers, Kai Kuhnhenn and Luisa Cordroch, we will discuss the problems of the prevailing approaches and delve deeper into why climate change mitigation scenarios need to urgently consider energy sufficiency / degrowth in the Global North, taking the heat transition and the gas phase-out debate in Germany as an example.

Kai Kuhnhenn worked 8 years at the Umweltbundesamt on climate scenarios and is now active at Konzeptwerk Neue Ökonomie. Luisa Cordroch is doing her PhD at the Europa Universität Flensburg, where she’s working on sufficiency energy scenarios and the heat transition (Wärmewende).

9th of Juni: Fossil fuels, conflict and militarisation - The struggle against gas as anti-colonial resistance

with Ilham Rawoot and Fernando

You can find the recording here (much of the audio is in English, some parts are Spanish).

Violence in all its forms was a precondition for colonialism and it is at the core of fossil capitalism. Violence against indigenous and peasant communities was and is a central pillar of the playbook that erase(d) other cultures and ways of living. These are the same tactics that make the expansion of the fossil fuel-industry complex and related forms of extractivism possible. In their insatiable pursuit of new regions to exploit, fossil fuel corporations, sponsered by states and economic elites, displace communities and destabilize territories, triggering conflicts that most of the times involve military and paramilitary forces. That storyline has ben repeating itself over and over again in different parts of the world.

In this online session, Ilham Rawoot from Justiça Ambiental/Friends of the Earth Mozambique will guide us through the disastrous actions of the french corporation Total, that has been creating disaster and suffering in the province of Cabo Delgado in Mozambique with their plans of future gas extraction and the construction of the Afungi LNG Park.

Fernando will illustrate how fracking, the construction of new gas pipelines, thermo or hydroelectric plants in the territory today called Mexico, is an example of how colonial logic is still in force. The struggle against the PIM (Morelos Integral Project) or the struggle of the Yaqui communities such as Loma Bácum against the construction of the “Sonora Gas Pipeline” need to be heard.

Get your EA-Number for Lützerath:

Mail from Hamburg authorities in connection with the action days in summer 2022 or with “Gerechtigkeit Jetzt” in 2021?

17. January 2023 ++ Ende Gelände blocks the Rhenish mining area ++ Coal excavators in the Inden open pit mine and coal railroad to the Neurath power plant are at a standstill ++ "Lützerath lives! From now on, Lützerath is everywhere!" ++