Today we have news from the past, present and future for you: The evaluation of the International Working Group of the last action brings an international view of our Hamburg action in August. Currently, several court cases are pending against activists of the Ende Gelände action of 2019. Lützerath looks into an uncertain future because the threat of eviction seems to become more and more concrete.

1. International evaluation of the action in Hamburg
2. Court proceedings at Borna Local Court
3. Lützerath lives!
4. Save-the-Date: Alliance meeting from 9 to 11.12. in Hanover 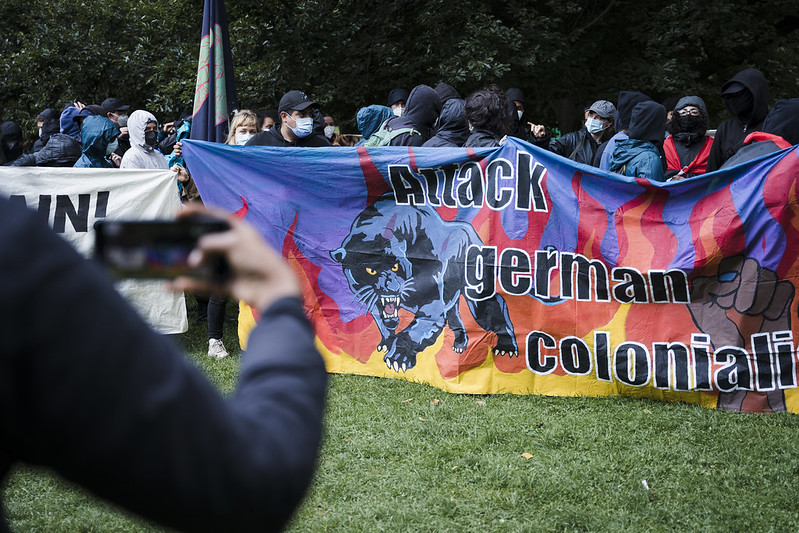 1. International evaluation of the action in Hamburg

– written by a someone from the AG International –

Despite not having a huge international mobilisation effort for this Ende Gelände we managed to receive an estimated 200-300 internationals at our camp. It is really difficult to estimate exactly how many internationals attended the camp and action but we had people from France, Belgium, the Netherlands, the UK, Denmark, Sweden, Switzerland, the Czech Republic, Poland, Spain, and Italy. There were even comrades who came from as far away as Latin American countries, Australia and Texas. This necessarily sparked the debate as to the ethics of people flying to Ende Gelände.

Hopefully, attendance at Ende Gelände will inspire these activists and some may even recreate the tactic of a large-scale protest camp and action. The winners for the most internationals mobilised goes to Italy, where around 70 comrades came as a result of active discussion around Ende Gelände at the Climate Camp in Turin alongside the exciting climate justice work that has been happening within the ecological struggles in Italy over the last few years.

Particularly in relation to the intense police repression, we faced this year, the experience of many of the internationals was not universally positive. The vast majority of internationals went into the Purple finger where we were heavily pepper sprayed, beaten with batons and targeted with water cannons. The question has been raised as to how internationals can be integrated into the action structures and what communication occurs.

That being said, as an international Ende Gelände organiser, I know I am not alone in appreciating the beauty of people coming together from all over Europe (and the world!) for the first time in three years. 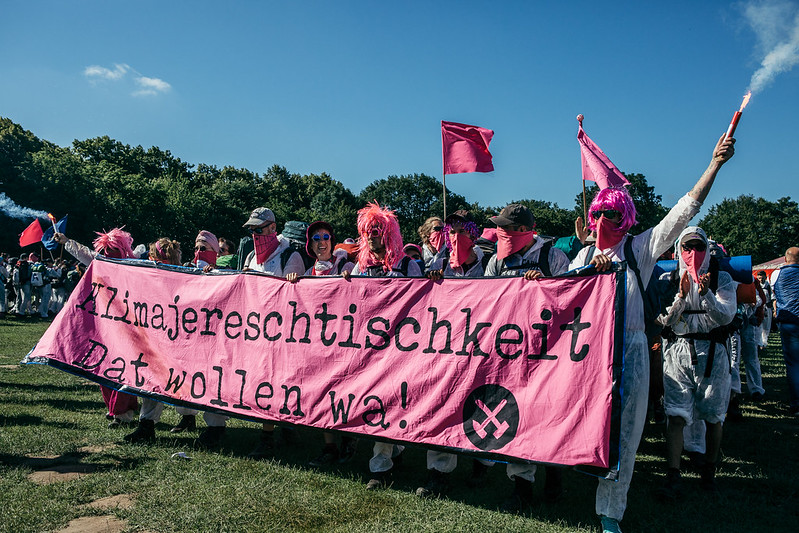 On 13 October, a series of criminal trials began in Borna near Leipzig for lignite protests by the Ende Gelände action alliance in November 2019. At the time, more than 1,000 activists had entered the Vereinigtes Schleenhain open-cast mine near Leipzig, peacefully blocked coal mining and then voluntarily left the mine. The Mitteldeutsche Braunkohlengesellschaft (MIBRAG) filed charges of trespassing. But it was not only activists who were charged. Several journalists who reported on the action and two members of the state parliament who were there as parliamentary observers were also accused of trespassing.

Sina Reisch, Ende Gelände’s press spokesperson, said: “MIBRAG wants to intimidate us. I am only being charged because of my press work for Ende Gelände because my personal details were not recorded by the police during the action. We are accused of trespassing, but what kind of trespass is that? The house is on fire and we are stopping the fossil fuel arsonists from pouring more oil on the fire.” Marco Bras dos Santos, a concerned journalist, adds, “A democratic society is unthinkable without freedom of the press. The fact that media professionals are being sued by energy companies shows an anti-democratic understanding. I would like to see this practice become a thing of the past.”

MPs from different parties repeatedly accompany protest and blockade actions of the climate justice movement. They observe, control the rule of law of police actions, de-escalate and mediate. This form of parliamentary observation is considered an important guarantor of freedom of assembly. As parliamentary observers, two long-standing members of the Saxon state parliament accompanied the Ende Gelände action at the time. In July 2021, the state parliament stripped both MPs of their immunity to clear the way for their prosecution.

The criminal trials will take place at Borna District Court near Leipzig, Leipziger Straße 67a, on the following dates:

The trial on 13.10. resulted in a guilty verdict and a heavy fine, appeal proceedings are ongoing. More court dates are sure to follow, so stay tuned to our website.

On the Ende Gelände flickr account you can find more photos from current and past actions, including photos from the blockade action on 30 November 2019 in the Leipzig lignite mining area: https://www.flickr.com/photos/133937251@N05/albums (Album: EG 2019 Lausitz & Leipzig). 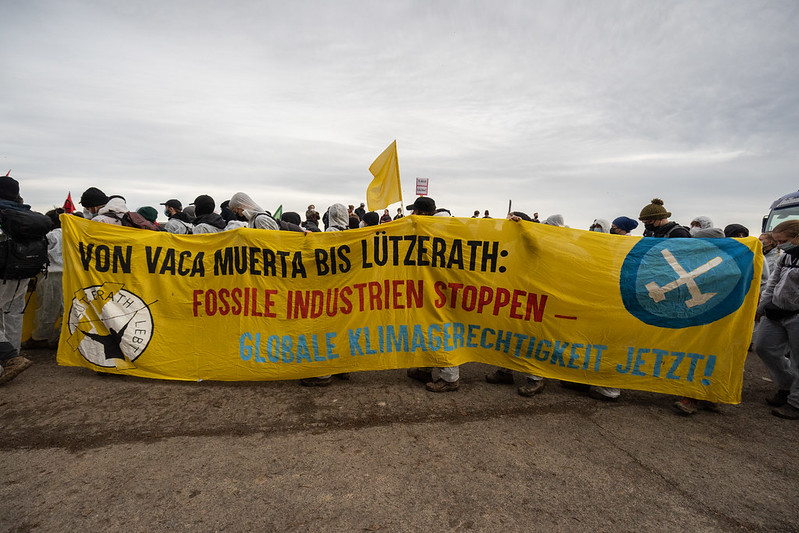 Lützerath is a village in the Rhineland that is to be destroyed for the profits of a major international corporation. RWE wants to demolish the village to burn 650 million tonnes of lignite. This would mean Germany breaking the Paris Climate Agreement. We will prevent that.

On 28 March 2022, the OVG Münster cleared the way for eviction by confirming RWE’s “early transfer of possession”. Since Eckardt surrendered his farm at the beginning of October and Robert Habeck and Mona Neubaur of the Greens announced the demolition of Lützerath, an eviction has depended on the arbitrariness of RWE.

As it looks, the imminent eviction of Lützerath is getting closer and closer – nevertheless or just because of that we are still here and invite you to join us! The next weekends there will be skillshares and educational offers (check the programme every now and then).

Here on the ground, we join centuries of struggle around the world: We are rebelling against a colonial system that is destroying the foundations of life worldwide. Come to #ZADRheinland and defend Lützerath with us!

Pack your backpack and come along to continue building Lützerath. The clearing season has started and Lützerath needs your support now!

Do you want to support Lützi within Ende Gelände? Please contact us at the following e-mail address: unser_aller_camp@riseup.net 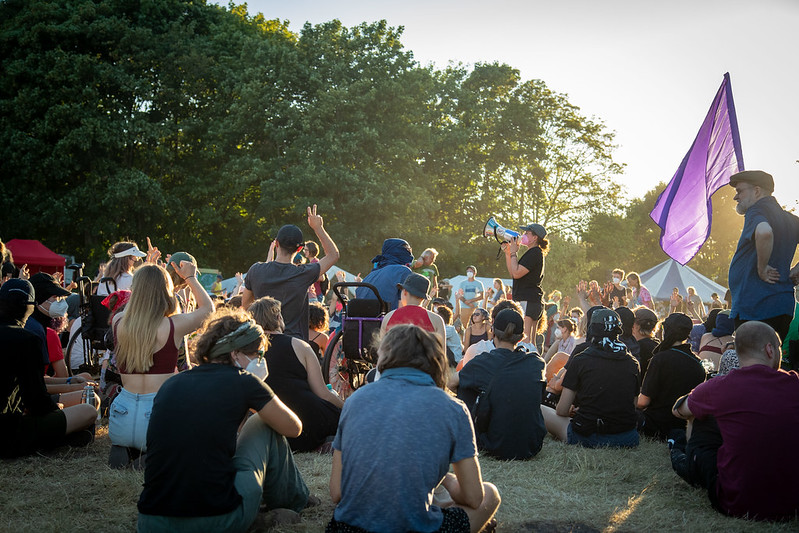 After the action is before the action. That’s why we invite you to the alliance meeting from 9 to 11 December in Hanover! Here we want to think about the next action season. A very good start also for new people!

Please note the date in your calendar, you will find more information on our website soon. There you will also find the registration form about a week before the dates.

8. November 2022 Oppose the absurdity of the current energy policy with strong protest! In a strong demonstration in solidarity with the global civil society for climate justice we gather on Nov. 12th in Lützerath. The coal under Lützerath must stay in the ground - for climate justice worldwide! Continue reading ...

4. November 2022 Today we have news from the past, present and future for you: The evaluation of the International Working Group of the last action brings an international view of our Hamburg action in August. Currently, several court cases are pending against activists of the Ende Gelände action of 2019. Lützerath looks into an uncertain future because the threat of eviction seems to become more and more concrete. Continue reading ...

22. October 2022 Hey, we are back with a new climate anti-repression newsletter. After almost 10 years of denial of personnel in the climate justice movement, we look back at the strategy and want to stimulate to discuss it anew. Check out our focus for that. In addition, there are again trial dates and people in jail who are happy to receive your mail. Continue reading ...

++ Ende Gelände in court ++ Prosecution of climate protest is a no-go for democracy ++ Trials against activists, journalists and MPs near Leipzig begin ++

12. October 2022 "What is criminal is when energy companies like MIBRAG make profits with dirty lignite and burn up the planet for their profits. Ende Gelände opposes the climate crimes of the fossil corporations time and again. It is completely absurd that activists are therefore criminalized and put on trial. We will not be intimidated. On the contrary, the climate justice movement is getting bigger and stronger." Continue reading ...

10. October 2022 The action alliance Ende Gelände announces its intention to prevent the eviction of the village of Lützerath. Continue reading ...

12. October 2022 ++ Ende Gelände in court ++ Prosecution of climate protest is a no-go for democracy ++ Trials against activists, journalists and MPs near Leipzig begin ++