Cologne, Germany, 10.08.2019: Swedish climate activist Greta Thunberg visited the Hambach Forest near Cologne, Germany, today. The forest has become an internationally recognised symbol for the impacts of coal mining and the movement for climate justice in Germany. It has been occupied by climate activists for seven years and saw demonstrations of over 50,000 people for its protection during an eviction last summer which lasted for weeks. On her way to the New York Climate Summit, Thunberg met youth climate strikers, activists, and local residents facing resettlement due to coal mining. The forest is currently experiencing existential stress due to ongoing drought, worsened by the climate crisis.

Greta Thunberg: “We are destroying nature. And even after month of protests, almost nothing has changed. Seeing places like the Hambach mine makes me devastated. Time is rapidly running out and the people in power keep failing us. We are done talking – now is the time for action. Germany – as well as the rest of the world – needs to start the immediate rapid coal phase out and RWE has to stop destroying the Hambach forest. Our war against nature must end today. For this to come true, each and everyone of us need to fight – I urge all of you to join the global climate strike on 20th and 27th of September 2019.”

Kathrin Henneberger, spokeswoman of Ende Gelände, who have carried out blockades of civil disobedience in the coal mines with thousands of people: “These coal mines are a crime scene of the climate crisis. This is the place where our future will be decided. Greta’s visits is a milestone for the climate movement, as millions of people are organising globally to defy the fossil industry. We have an obligation to end the age of fossil fuels right here.”

Clumsy, longtime activist in the Hambach Forest: “The effects of the climate crisis are already visible all over the world. Our forests are dying and global tipping points are being exceeded. We now have to create places like the occupation in the Hambach Forest all over the world, which stand in the way of the destruction by capitalism. Whether striking like Greta or other forms of resistance, we all have to take responsibility and stand together in solidarity.”

The open-pit mines and power-plants in the Rhenish coal fields west of Cologne are Europe’s largest source of greenhouse gases. Germany’s federal coal commission proposed a coal phase-out by 2038, which would miss the Paris Accord by one billion tons of CO2 [1]. The Hambach coal mine has come as close as 50 meters to the Hambach Forest, which the coal commission suggested to protect. In October 2018, a court injunction stopped clear-cutting the forest, forcing mining operator RWE to reduce its capacity and install a cutting moratorium until 2020. Climate activists and local residents demand the state’s government to protect the forest, restore its ecosystems and stop the coal mines.

Millions of people are expected to join the week of global climate strikes in September. In Germany, a broad coalition of students, adults, celebrities and workers is calling on people of all ages to follow the students’ lead and take the protest to the streets on September 20th.

Photos for editorial use by Ruben Neugebauer 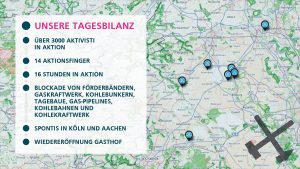